All posts by Melody Boggs

Why Self-Indulgence Can Be a Good Thing for Your Writing

Despite how much writing can be a pleasurable hobby, there are a staggering amount of “don’ts” that writers are told to avoid in order for their work to be viewed as “good.” Don’t use adjectives. Don’t give any exposition ever. Don’t use clichés or tropes because X audience is tired of them.

Don’t do this, don’t do that, on and on, until you stop and realize that, if you choose to not do all of the things you’re not supposed to do, well… you wouldn’t get much writing done, would you? There’d be no wiggle room for it.

Learn Technique from a Greek: Where Modes of Persuasion Meet Content Creation

If you live in the midst of Western civilization, some English or History teacher probably told you that the ideas of Ancient Greece form the roots of our modern society. Everything from our structures of government to our philosophy, architecture, science, and arts resonate with Greek thought and ideals. And, if you’ve seen My Big Fat Greek Wedding, you “know” for a “fact” that any word—any word—can be traced back to Greece.

Would you also believe, then, that the Ancient Greeks knew a thing or two about content creation before we did? We’re talking them having thousands of years of experience over us—so much for content creation being a “new way” of doing things.

The Greeks had different purposes than we do now, though. They weren’t focused on selling a product or service to an audience. Rather, they were in the market of ideas, of sharing them, of persuading others to share them, and having them spread.

They built whole professions on this concept. Orators, or speech-makers, would stand in front of a crowded amphitheater, using their words, voice, body language, professional backgrounds, and logic to get their audience on board with their ideas. Famous rhetoricians throughout history have followed in these Greek orators’ footsteps: W.E.B. Du Bois, Susan B. Anthony, and Martin Luther King, Jr., to name a few. (I had to give you some good examples; no doubt the word “rhetoric” makes you think of corrupt politicians, and that’s enough to ruin anyone’s day.)

So who was the self-proclaimed father of rhetoric in Ancient Greece? My man, Aristotle.

But content creators aren’t rhetoricians or speech-makers, so how can Aristotle’s rhetorical technique help them connect to their audiences? How can you be as effective as Reverend King? Isn’t that a bit of a stretch? 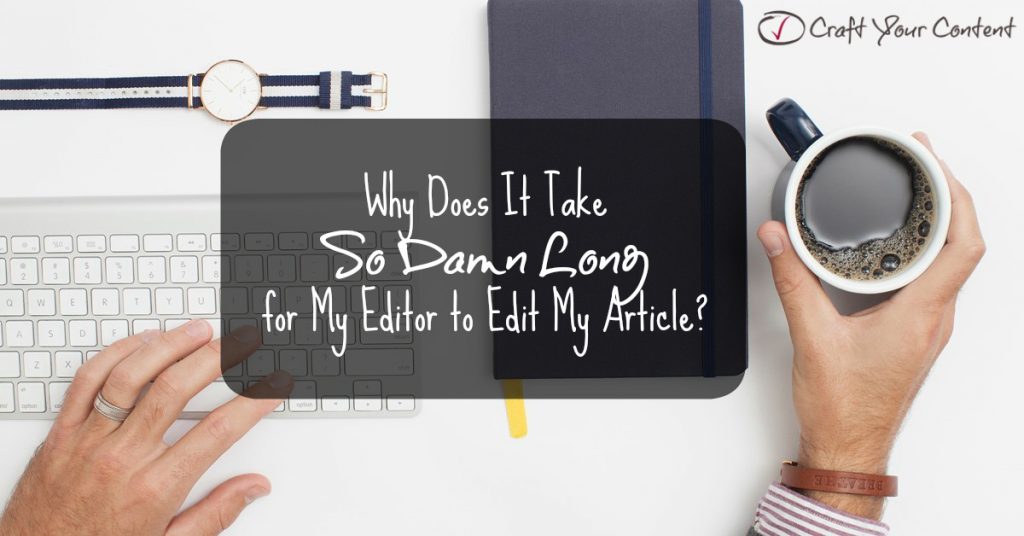 Why Does It Take So Damn Long for My Editor to Edit My Article?

You’ve just finished writing your latest piece and sent it off to your editor.

Great, you think, time to play the waiting game. Again.

As you piddle around watching Netflix and seeing how many cheesy poofs you can fit in your mouth (oh, sure, like I’m the only one who does that!), you start to wonder. What’s the hold up?

Surely it doesn’t take several hours, let alone a few days, to catch a few typos. You know your editor has a personal life, but still.

Why does it take so damn long for her to edit your article?Continue reading

You May Know What You Are Trying To Say, But Your Readers Likely Don’t

“Well,” the writer says, the equivalent of a shoulder shrug in their tone, “I know what this means and I like it, so we’re keeping it.”

Sessions like these happen all the time between writers and editors when it comes to getting those crucial rough drafts ready for publishing—though perhaps not quite as dramatically. Still, there are always hurdles to overcome, particularly when it comes to ensuring a writer’s thoughts are understandable to his or her readers.Continue reading