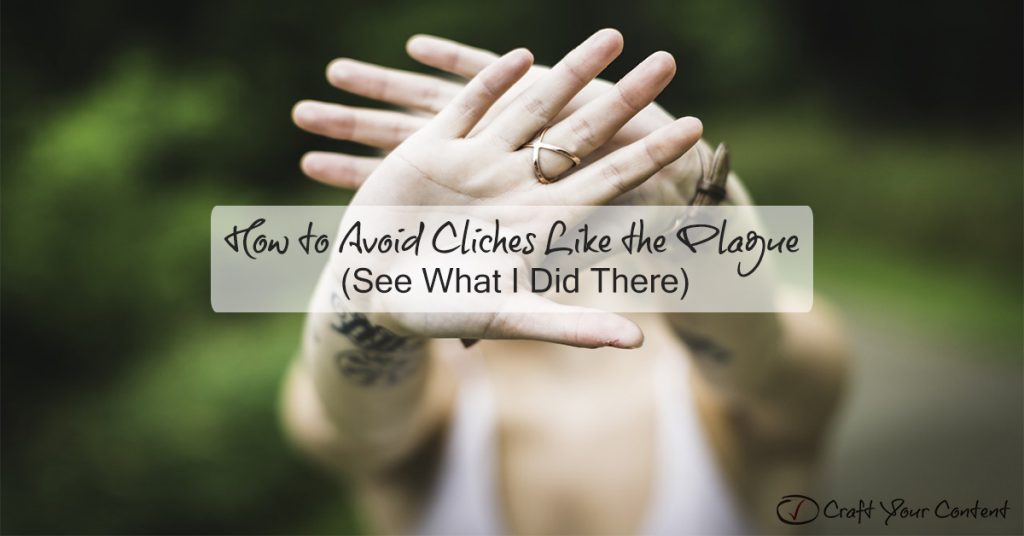 Am I the only one who reads this phrase and hears a sixteen-year-old girl snapping her bubble gum and twirling her hair?

Cliches are phrases or words that started off interesting and impactful, but have been so overused that they’ve become comfortable, perhaps even predictable. Comfortable isn’t good. In the business world, comfortable is boring, and boring isn’t good for business.

We are all guilty of using cliches, myself included. We use cliches so often that we don’t even realize when we’re using them. This is a problem – a big problem.

You see, people have short attention spans. Every word you choose should be placed with intention. You need to create impact with your words and maximize the chances that your target audience is going to pay attention to what you say. The statistics are out there: the majority of people that land on a given article will only read through about 60% of it, and 10% of viewers won’t even read it at all.

Without impact, your message will fall on deaf ears.

Let’s get into why using those apparently trivial little cliches does more harm than good, and what we can do to break the habit of using them.

“If your friends jumped off a bridge, would you jump, too?”

The smartass in me would always answer “YES!” to this question, asked all too frequently by  my mother whenever I did anything wrong. In her eyes, it was always the god-awful influence of my friends that caused me to slip up.

Reality was, I was probably a little at fault for a few of the juvenile things I did.

But my mother was right in one respect: if you want to make an impact, you need to stand out from the crowd.

The ads that you remember are those that have the biggest impact on you. Sometimes advertisers use shock value (see Doritos baby here) or pull on your heartstrings (see Budweiser’s lost puppy here).

The NFL Super Bowl is almost as well-known for its commercials as it is for the actual football game.

The advertising agencies that design these Super Bowl ads are under enormous amounts of pressure to deliver the most memorable ad. With 30-second ad spots costing $5 million dollars, is it any wonder?!

Point being, just because everyone else is doing something does not mean you have to do it. You don’t want to be boring. You want to have impact and be memorable.

Pick up a magazine or go to a random website and find a cliche. Now, come up with an alternative word or phrase that could be put in its place. Does it create more impact? If you were reading along and came across it for the first time, would it jump out at or surprise you? If yes, point made. If no, try again.

The English language started developing around the 13th century. Over many, many years, cliches and idioms have been coined and incorporated into everyday language. Cliches and idioms are generally only recognized by those fluent in a language.

Let’s take a look at an example of a cliche that didn’t quite cross international waters seamlessly.

In an October 2000 interview for 60 Minutes, legendary news journalist Mike Wallace sat down to interview the former President of Russia, Boris Yeltsin.

Everything was going well. They bantered back and forth a little bit about the economy and politics, but then…

Mike Wallace asked Yeltsin if he had “thin skin” when it came to criticism. When this was translated, however, Yeltsin became red-faced and angry.

In America, “thin skin” is known to mean the inability to withstand criticism. Due to the difficulty of translating a figurative cliche into Russian, Yeltsin’s translator interpreted it as “thin skin,” which meant hippopotamus. Yes, the former Russian President thought the veteran news journalist had insulted him by calling him a hippopotamus.

“An experienced journalist like yourself,” Yeltsin said, “should express himself in a more civilized fashion!”

I’m sure Mike Wallace wanted to crawl into a hole in the floor.

A popular British cliche, “Bob’s your uncle,” has also been known to cause frequent communication gaffes. To the British, this means “everything is going to be fine or work out for the best.” To Americans, it is taken at face value – you have an uncle named Bob!

If you have an international audience, it’s best to avoid figurative idioms and cliches. Stick to the literal meaning of words.

Before using an idiom, ask yourself, how common is this idiom? Is it known only to a particular region or within a specific group of people? If the answer is yes, it might be a good idea to use different wording. You don’t want to risk sounding offensive, ill-educated, or like an idiot. If you’re unsure, it’s always best to err on the side of caution.

To avoid being accused of expressing yourself in an “uncivilized fashion,” be present and observant when you’re writing.

Cliches will cause your audience to tune you out. They have heard what you’re saying many times before and the point you are trying to make is lost. They lose focus and are instead thinking about their to-do list or where they last saw their cellphone charger.

Here are the 20 most common cliches used today, according to the Oxford English Corpus, along with alternative suggestions for each.

Just Get It Done

What can you do when your brain can’t think of another way to write something without using that damn cliche? You’re in vapor lock. Fortunately, there are so many places you can go to find an alternative word or phrase.

First, think about what the cliche really means and what you are trying to convey. If there are multiple words, break it down. Then, begin by looking up the word or words in a thesaurus.

For each word, there will be a list of synonyms. Play around with these synonyms to come up with another way of getting your point across.

Taking a break from working on a particular part of your work, or the whole work altogether, can give you a fresh perspective. Walk around the block, or play a few rounds of Words With Friends.

Sometimes all you need to get those creative juices flowing again is time for your brain to reboot.

If you really find you are stuck and have exhausted the alternatives, it might be time to rewrite the sentence. Sometimes it is the only way to fix it – and that’s okay! You want impact and to get your point across in the best way possible.

Don’t give up. If rewriting the sentence is the only way to get that accomplished, so be it!

Cliches can cost your business or brand its reputation. You don’t ever want to be caught in a Mike Wallace situation: sitting across from an important dignitary, with no idea that they think you’ve just called them a hippopotamus. Instead of using “thin skin,” Wallace could have asked something like “do you take criticism well?” This would have avoided embarrassment for both parties.

Oftentimes, you don’t need to replace the cliche with a word or phrase; it can just be eliminated with your point still intact. If you read it and are unsure if your point remains, find someone else to read it and ask for honest feedback.

If you want to be taken seriously and not be perceived as lazy or someone who just doesn’t care, avoid cliches. But are there times when cliches are acceptable? Absolutely. Here are a few acceptable places to get your cliche fix:

Example: Communication with a coworker over plans outside the office

Example: Not pulling a Mike Wallace – being 100% certain the recipient will know what you’re talking about!

At the end of the day, it comes down to using your best judgement. If you feel that your work conveys professionalism and your point easily comes across – then run with it.

About the Author Amber Van Karsen

Amber Van Karsen is a freelance writer. She has an impressive collection of many leather-bound books and her house smells of rich mahogany.