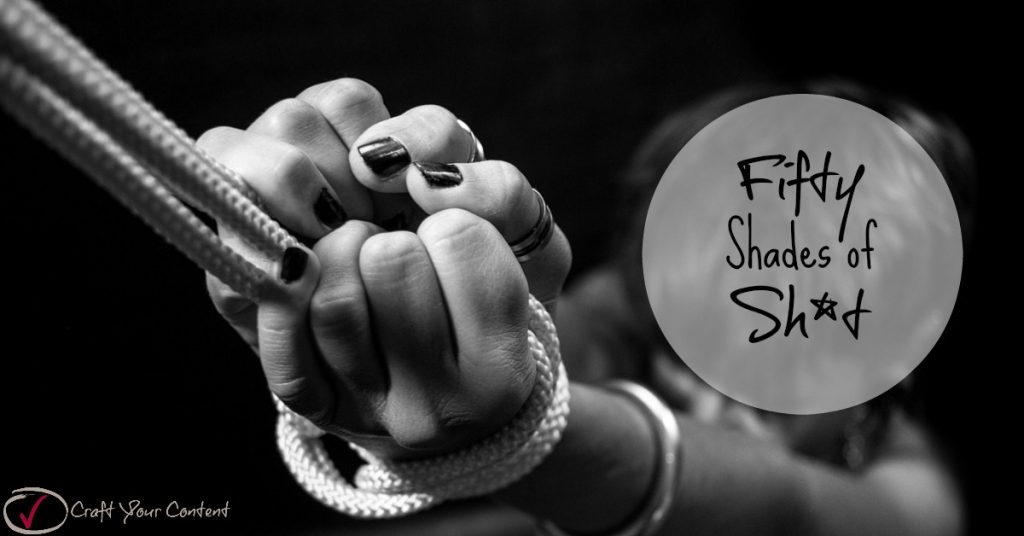 The 90s anti-drug public service announcement of actress Rachael Leigh Cook bashing a frying pan around her kitchen just popped into my head. “Any questions?”

This is your brain. 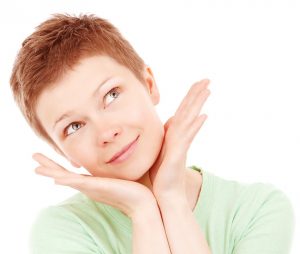 This is your brain after reading Fifty Shades of Grey. 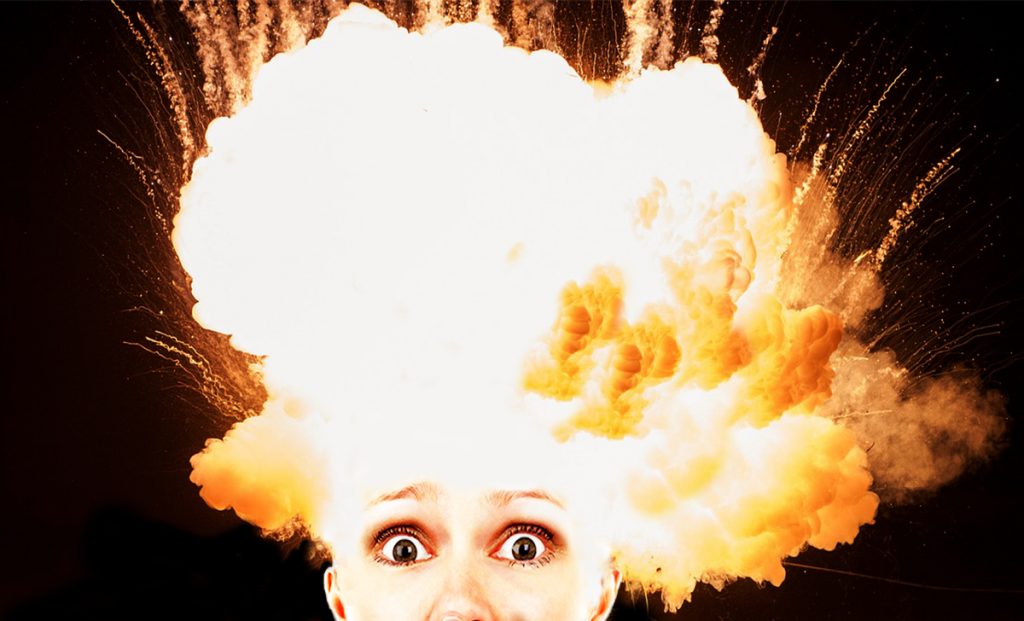 The success of Fifty Shades was largely due to one of the most successful viral marketing campaigns in history. Fifty Shades became the first book to sell one million digital copies on Amazon Kindle. By March 2012, the Fifty Shades trilogy was acquired and released by U.S. publishing house, Vintage Books. One hundred million copies of print and ebooks were sold, and the success spawned a bidding war between the biggest players in the movie industry, Sony and Universal. Universal scored the movie rights for an estimated $5 million dollars. For comparison, consider that the film rights to Dan Brown’s The DaVinci Code sold for $3 million dollars.

Fifty Shades succeeded at becoming one of the bestselling fiction books of all time. It’s in the company of some epic masterpieces. Let’s take a look at the kind of literary company Fifty Shades is keeping, shall we?:

The magnum opus of E.L. James has landed her in the company of some of the greats. So, how did this author rise from obscurity to landing on Time magazine’s annual list of Most Influential People? As someone who had never written anything besides fanfiction, it’s a pretty impressive feat for her. I do wonder how C.S. Lewis would react to reading an excerpt from Fifty Shades.

In 2009, E.L. James took on the pseudonym, Snowqueens Icedragon, and began writing Twilight fanfiction on the website fanfiction.net. She attained quite an impressive audience of Twi-hards and moved her work over to her own website. She changed the name of her work from Master of the Universe to Fifty Shades of Grey and deleted all Twilight references.

If she wanted to cash in on the success of Master of the Universe, she needed to erase all material, including character names, of Stephanie Meyer’s Twilight.

Upon the release of Fifty Shades, bloggers picked up the ebook, and word-of-mouth marketing made it a record-breaking hit. When the U.S. retained publishing rights, paperback sales soared. Within 11 weeks, Fifty Shades had sold over one million copies.

Speaking of succulent, E.L. James has a real problem with her use of adjectives. It isn’t so much that she uses too many (although some would argue that’s her primary issue): she uses the most obnoxious adjectives that when you’re trying to read it, it feels like you keep getting stuck in quicksand. You have a hard time pressing forward because you keep getting stuck on these misplaced, awful words! For example, let’s take a look at this G-rated excerpt (the only G-rated excerpt in the entire book):

“His voice is warm and husky like dark melted chocolate fudge caramel… or something.”

E.L. James is no Sylvia Plath, but comparing someone’s warm and husky voice to a melting bar of chocolate and then adding in the cringe-worthy “..or something”? There are plenty more examples of adjective abuse where this comes from! The book is littered with “I wanted to run my hands through his decadent, untidy hair” and “rather than sitting in your palatial, swanky, sterile office, feeling uncomfortable under your penetrating gaze.” It’s adjective hell.

Now, let’s compare that with a selection from The Lion, the Witch, and the Wardrobe. Yes, the genres are on completely opposite ends of the spectrum; however, we’re looking at the adjectives and the fluidity, not the content:

“Then two wonders happened at the same moment. One was that the voice was suddenly joined by other voices; more voices than you could possibly count. They were in harmony with it, but far higher up the scale: cold, tingling, silvery voices. The second wonder was that the blackness overhead, all at once, was blazing with stars. They didn’t come out gently one by one, as they do on a summer evening. One moment there had been nothing but darkness; next moment a thousand, thousand points of light leaped out – single stars, constellations, and planets, brighter and bigger than any in our world.”

When you read the C.S. Lewis excerpt, did you notice how effortless it was to read? You didn’t come across any quicksand; it was fluid and graceful. The adjectives he uses are perfect in context and connotation. James uses adjectives that jump out at the reader as out-of-place. I’m unsure if James was trying too hard or just has poor taste in words.

It’s an enigma as to how word-of-mouth marketing is responsible for the mind-blowing success of Fifty Shades. Readers are evidently immune to atrocious grammar and ridiculous clichés.

Mix all ingredients together and pour into blender. Leave the lid off and set it on high for two minutes. Scrape the resulting concoction off the floor, ceiling, and walls; pour into bowl. Serve chilled. Enjoy with a glass of your favorite red wine. Perhaps a 2012 Fifty Shades of Grey Red Satin?

Fifty Shades became a success by temporarily filling an unanticipated gap in the market of the romance genre and capitalizing on technology. Up until this point, the romance genre was lackluster, and the storylines were recycled.

With Fifty Shades it wasn’t the semi-recycled storyline that drew people in, as much as the insanely successful viral marketing campaign, a sexy, modern cover design, and the ability to read the book under virtual anonymity.

Fifty Shades has become a sort of cultural phenomenon: Ordinary women being able to have the perfect male specimen fall in love with everything about them. Having someone so consumed with a woman that their every waking thought has to do with her. Borderline creepy or every woman’s fantasy?

According to the University of Montreal’s Journal of Science Medicine, over 65% of women (with an average age of 30 years old) polled listed being a sexual submissive as a huge turn-on and fantasy. So, Fifty Shades could definitely be a book they would be interested in, as being in a submissive relationship is a large chunk of the book.

Sensationalism is the use of shocking or exciting language to elicit a strong emotional response from the audience. Sensationalism attracts readers because our human brains are designed with an innate desire to experience the full spectrum of emotions. On a subconscious level, readers want to feel desired or feel the sting of betrayal. It’s being able to live in someone else’s shoes: do things and see things that in your own reality wouldn’t even be a possibility.

With Fifty Shades you are able to be the object of affection of one of the most desirable men in the world, the billionaire Christian Grey. You get to feel what it’s like to be a submissive partner to someone with a sordid past.

Christian gets pleasure from inflicting pain on women and his only relationships are of a dominant-submissive nature. His latest conquest, Anastasia Steele, seeks to break the spell and get him to be satisfied with a normal, non-violent romance. Can you imagine if this stuff was real life? Christian Grey would be forced to take some sort of antipsychotic medication and serve time in jail for domestic violence. Anastasia Steele would be undergoing some serious counseling.

You Don’t Judge a Book by Its Cover, or Do You?

I remember when I was younger, I had a nanny that I loved—basically because she let me do whatever I wanted. I clearly remember her coming over and when my parents would leave, she would pull out a paperback, “a bodice-ripper” as I like to call them. I could have started a bonfire on the living room rug, and I don’t think she would’ve noticed until the flames began to consume her book.

I was intrigued by these bodice-rippers. The covers were unlike anything I’d ever seen before. Muscle-bound men caressing damsels in distress. I snuck a peek once and at the ripe old age of ten years old, I concluded the book was trash.

Publishers found the association of bodice-ripper book covers with old ladies was prevalent among women in their early 20s to late 30s. Women either saw aspects of themselves in shy, insecure Anastasia Steele or their interest was piqued by some reference to the book in pop culture (e.g. a blog post review). I guess I wasn’t the only one that had a nanny who enjoyed her succulent bodice-rippers.

The Literary Inquisition of 1748

One of the most persecuted and banned books in history is Fanny Hill by John Cleland. This book, written in 1748, was groundbreaking, and its publication led to the arrest of those involved in its creation. The story revolves around a young orphan girl who becomes involved in prostitution to survive. The scenes are violent and contain everything from homosexuality to flogging.

Fanny Hill became extremely popular when pirated editions began circulating throughout Europe. The book inevitably made its way to the U.S. in 1821 when Peter Holmes published it. The government’s reaction was hurried, charging Holmes with indecent and lewd behavior. The nation’s first obscenity trial ended in Fanny Hill being banned and Holmes being called a “scandalous and evil disposed person” by a Chief Justice.

In 1963, the book was the subject of an obscenity trial once again, yet the defense’s argument that the book was of historical and artistic significance triumphed.

What will the next Fifty Shades be? Trends in literature are difficult to predict and often happen unexpectedly. It’s easy to determine fashion trends. Fashion designers can predict up-and-coming fashion trends a year or more in advance.

Literary marketing efforts continue to be social media driven. Take for example the bestseller, The Life Changing Magic of Tidying Up: The Japanese Art of Decluttering and Organizing by Marie Kondo. What publisher in a million years would have ever thought a book in the Philosophy genre—about decluttering—would become a New York Times bestseller and #1 on Amazon?

With the availability of self-publishing templates allowing anyone to become an author, the market for ebooks has become oversaturated. Amazon had 600,000 ebooks in 2010 and now, six years later, lists over 5 million ebooks. One can only imagine how many of those 5 million ebooks are complete crap.

So, instead of jumping into the sea with millions of other aspiring authors, some have turned towards becoming publishers. As a self-published author, you can sell audiobooks and book rights on an international level. This opens up an entirely new playing field for aspiring writers.

Fifty Shades was a God-awful book, but behind it was a masterfully executed marketing campaign that, as writers, we can stand to learn from. Here are five important lessons learned from Fifty Shades of Grey:

About the Author Amber Van Karsen

Amber Van Karsen is a freelance writer. She has an impressive collection of many leather-bound books and her house smells of rich mahogany.