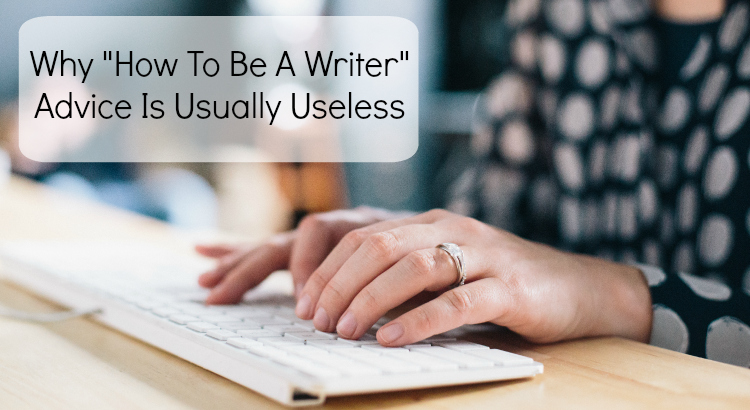 Why “How To Be A Writer” Advice Is Usually Useless

Over the course of my 10+ years as a freelance writer, I’ve heard all these questions and a dozen variations on them. As soon as someone finds out that I spend my time sitting in cafes, sipping cappuccino, tortoise-rimmed glasses on, pouring myself into articles and stories, laughing aloud at the brilliant and witty prose I just created, they immediately want to know how they too can live such an illustrious life.

Usually when people ask me how to replicate this romantic vision for a writer, I blink blankly at them. Not to be dismissive, but instead to try to cycle their request for information through my brain. There’s two important things to understand about this scenario:

So my blank blinky stupor has to do less with you and more with me.

How did I become a writer? How did I get to be a better writer than when I started? How the hell is this my life?

Most writers I know (and damn, do I know a lot of writers) face the same confused introspection when asked about their writing skills. That’s because they are usually jerks who are insecure about their talent and don’t want to share their secrets.

Most writers get all blank and blinky because the secret they don’t want to share is: They don’t know how they became a writer…let alone one that is good enough to be paid for writing.

They start doling out random pieces of advice, cause who wants to actively pursue being a jerk?

The most common and irritatingly condescending advice?

If you want to be a writer … then just write

Immediate reaction? You are totally a jerk who is insecure about their talent and doesn’t want to share your secret. Whatever. Lame. Go get hit by a bus. Jerk.

Writers aren’t doling out that advice because they are trying to be jerks, though.

They are doling out that advice because they don’t have anything more constructive offer.

Of course talented writers have secrets that have gotten them where they are. BUT THEY HAVE NO IDEA WHAT THOSE TIPS AND TRICKS ARE.

Writers get to be talented writers cause they write. Most talented writers write a lot. Stories don’t get written magically at night by Neil Gaiman’s elves. (How freaking great would that be though?!)

How did Stephen King get to be the most prolific writer in history? He writes 2,000 word per day.

But here’s the thing.

Stephen King does a LOT more than just sit and write 2,000 words per day.

Just write writing advice is bullshit if you want to actually help them.

It’s like telling someone that they can become a brain surgeon if they just start surgeoning. I think we can all agree that no one wants an untrained and unskilled person running around practicing surgery. Pretty sure that will end like every single Saw movie.

I said it before: Writers have no real idea how they became a writer cause there wasn’t really a process. There wasn’t a way for them to refine their skills. They got to be better writers cause they wrote. And they figured out the rest along the way.

What if they took the time to stop and think about what they were doing? What they had done? What they do every day.

No one is just going to tell you their secret and make you a better writer. You’ve got to get the secrets then work on implementing them yourself.

I think that the “just write” advice is both vague and reassuring. You have to star somewhere. I had a lot of writing dreams that forced themselves through me onto the paper. I kept writing and sharing them. This lead to a lot of projects and a lot of questions I asked people as I figured out what I wanted to get from writing. But writing forever without training and doing and expecting nothing else in order to gain mastery is foolishness. I totally agree.

Good luck on your continued writing journey! (I am wondering if turtle-rimmed glasses need to be my next eye wear purchase!)

I used to do SEO blog/content writing but it’s not quite what I have in mind when I think of a “writer” so I ditched the gig. I would love to write my own books soon!

Jerry Seinfeld was once asked by a fledgling comic, “What’s the one thing an up and coming comic could do to improve their chances of hitting it big like he did?”

The rookie was looking for the secret he could apply once and hit a home run with but he was in for an answer most people won’t like.

Jerry told the wanna-be to go to an office supply store and buy himself a calendar, one of those ones you can put on the wall and see every month and everyday of the year at a glance and a red marker.

He told him “The answer to your question, is to write everyday. Not every other day. Not once a week. EVERY DAY. After you’ve logged your writing for the day, you can face your calendar, marker in hand and put a fat red X through that day.”

He said “Don’t break the chain. Doing this got my routines razor sharp and kept my creativity flowing when I needed lots of it and this insured I was on fire when opportunity knocked at my door.”

I like this advice. To me it makes common sense. Of course, it helps to also fuse this with Stephen King’s advice to the same question from fledgling writers which in its most simplified form is, “Read a lot and write a lot.”

Where I think Jerry’s advice can fall flat or into a wall that leads a person to quit or whine, is if they aren’t loading their mind up with the raw material it needs in order to assemble words on a page.

Everything I’ve ever said, I learned from someone else. I create nothing. God or the great one or the architect of the universe or whatever anyone chooses to call it is the only that creates from scratch. All I do is merely reassemble what I’ve uploaded into my mind and the quality of what I download out of my mind onto the page depends on the quality of minds I’ve been exposing myself to.

I believe the majority of people who say they want to be writers or struggle with writing, run into the blocks they do because they do not abide by one of my favorite quotes relative to this topic, “Consistency is the last refuge of the un-imaginative.”

I hadn’t ever been a writer when I landed my first freelance gig and managed it no problem. It took far longer that I anticipated, but with time it has become a bit easier to switch into work mode and just get to it..

[…] How many times have you been told that, to become a writer, you just have to write? […]