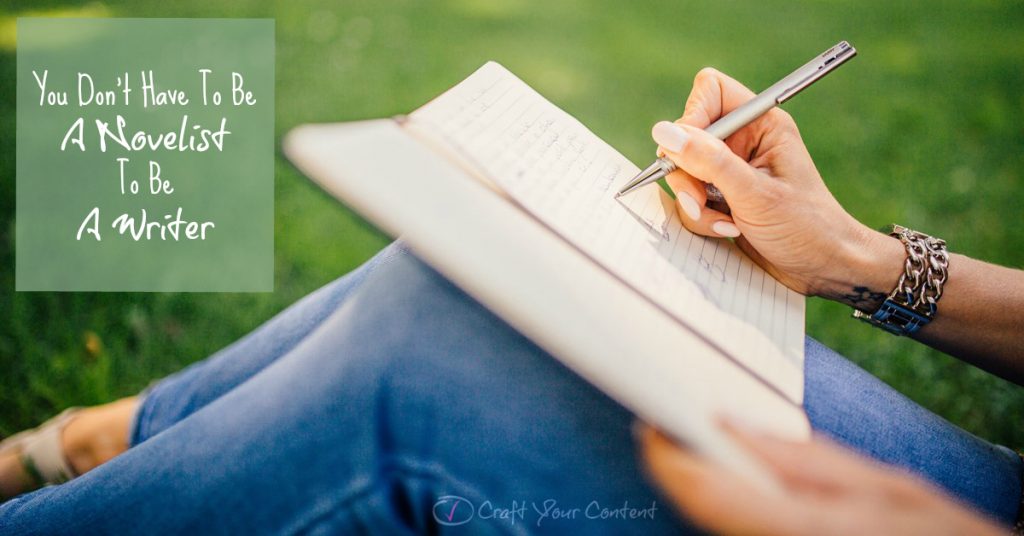 We all know the feeling. That hesitation when you tell someone you’re a writer.

That moment of awkward silence before the high pitched “oh!” and some variation of “that’s nice.” Most people automatically assume that by calling yourself a writer, you’re saying that you sit at home every day writing the next great masterpiece in literature. Or the newest round of Twilight fan fiction.

But that’s simply not true.

Don’t get me wrong, most days I do sit at home trying to write my magnum opus in the form of a groundbreaking screenplay, but that’s mostly because I’m a fresh-out-of-college English major who hasn’t been jaded by the business yet. Other days you’ll find me tutoring, editing, writing blogs, and managing social media accounts, or better known as doing my job.

Since graduating from college with my creative writing degree (a degree that garners the same reaction as above, only less convincing), I’ve been making my way through life as a freelancer. I’ve had the best of jobs (like being on the CYC Team) and the weirdest of jobs (like teaching a two-year-old to write), and I believe that ALL of them fall under the profession of writing.

That’s right. You don’t have to be a novelist to be a writer.

Do I Qualify as a Writer?

Have you heard of Buzzfeed? I’m sure you have. Those listicles qualify as writing just as much as a dissertation on Charles Dickens does.

If you aren’t comfortable writing long form blog posts, try writing little blurbs about your chosen topic instead. Add GIFs to do some of the storytelling for you. Pictures really do say a thousand words.

For instance, if I wanted to write a review about the new Star Wars film, but I was unsure how to express my feelings in writing, my blog would look a little like this:

Star Wars: The Force Awakens was a thrilling experience. I had an absolute blast watching it with such an enthusiastic (and costumed) crowd. Below, I’ve provided a spoiler-free review of the film in the form of reaction GIFs. Enjoy!

It felt amazing to be back in the theater and hear the opening notes of the theme. I got really nostalgic!

When I saw all the female characters:

It was so refreshing to see one of the lead characters be played by a female. Not only that, but many of the background characters—pilots, rebel fighters, and strategists—were also played by women.

When the bad guy revealed who he really was:

It was quite the twist, and it made the story a whole lot more complex. I could write a whole blog about it! Maybe soon…

A few more GIFs and you’d have a completed blog post. It took me approximately ten minutes to write (including finding the GIFs), and the word count doesn’t even hit 150. It’s still writing. It focuses on a specific topic, has a strong tone, and showcases a specific writing style. What more could you want?

Case in point: As long as you can put words onto a page, you are a writer. It’s as simple as that.

But if you want to get more specific, I’ve compiled a list of professions that most writers undertake.

Writing as a Profession

Even though I could probably give you a list off the top of my head, I did some research and found over twenty different careers for writers that don’t include being a novelist. That’s a lot of options! I’ll list them all for you at the end of this blog, but I’m going to go into detail on five of the easiest to jobs get into:

Editing other people’s writing is the majority of what I’ve done as a writer. It’s a job that will ALWAYS be needed. You know why? Because spell check can only fix a piece of writing so much. When you get into higher levels of writing, the mistakes are so nuanced that editing softwares won’t be able to pick up on all of them. That’s why you need a living, breathing human being with razor sharp editing skills to pick your writing apart.  The only problem with being a proofreader is that it’s severely undervalued by the people who need it the most. I once got asked to edit one thousand words for .01 cents per word. Yeah. That’s a TENTH of a cent. Needless to say, I told the guy to stuff it.

If done right, this could be the most profitable job you get as a writer. For SEO, SMO, and general marketing purposes, content is king. If you have a website, it’s a good idea to have a blog that goes with it. A lot of these site runners either don’t have time to write or don’t know how. So, they hire a blogger. That’s where you come in. If you do a good job and are able to bring traffic to their website, you can make a pretty penny for each article you write.

This probably comes the closest to being a novelist because of the different kinds of writing that ghostwriters do. There are companies who hire ghostwriters to take outlines and turn them into short romance books, mystery books, or thriller books. There are people who hire writers to pen their life stories for them. This is ideal for those who still want to grow their writing style and technique before publishing something under their own name. Some of these companies pay VERY well, too.

This may not seem like a job that falls under the title of “writer,” but I assure you that it does. To be a writing consultant, you have to know your stuff. I spent the last two years of college working at the university writing center, and it was the most difficult, yet rewarding job I’ve ever had. To tutor others in writing, you have to understand the most difficult aspects of writing and how to overcome the different challenges writers face. That requires a lot of experience and a lot of dedication to the craft. It sounds hard, and it is, but it’s also fun and rewarding when you start to see progress!

This title encompasses any and every possible odd job you could get as a writer. From writing blogs to editing, being a freelancer means taking the jobs you want and rejecting the jobs you don’t. Sounds fun, right? The only downside is the time it takes to build a reputation. I’ve been freelancing for six months now, and I haven’t quite built the reputation I need to get consistent work. It’s all about making good first impressions, because that’s what you have to do constantly. If you work for a company full time, they’ll accept when you occasionally screw up. If you’re a freelancer, you don’t have that luxury. They’ll just find someone else.

Just remember: As long as you write, you are a writer.

As promised, here are some other writing jobs that don’t include being a novelist:

See? There are plenty of jobs out there for writers that don’t require you to write a 50,000 word manuscript.

So next time someone asks you what you do, tell them you’re a writer with confidence. Not many can do what you do, so own that.

Brag about your job to anyone who will hear it. You know why?

Because writers are awesome.

About the Author Erika Rasso

Erika Rasso graduated from the University of Central Florida with a B.A. in English and marketing and the University of California, Los Angeles with an MFA in Screenwriting. She has worked as a writing consultant, an editor for literary and academic journals, and as an assistant to film and TV producers. In her free time, Erika enjoys playing games and writing screenplays (though mostly she just watches WAY too many shows on Netflix). She is the Director of Production for Craft Your Content.

[…] it’s a novel, blog post, script, or poem, we all have that one project that’s collecting dust. But the fact of the matter is, we simply don’t have the […]

Your 30-Day Plan for Getting Back on Track With Your Writing - Craft Your Content says January 7, 2019

[…] Let’s face it: If you’ve barely written on your blog in three months, would it really hurt to leave it another month while you get going with your novel again? Or alternatively, maybe it’s time to let the novel go and focus on your blogging—after all, you don’t have to be a novelist to be a writer. […]