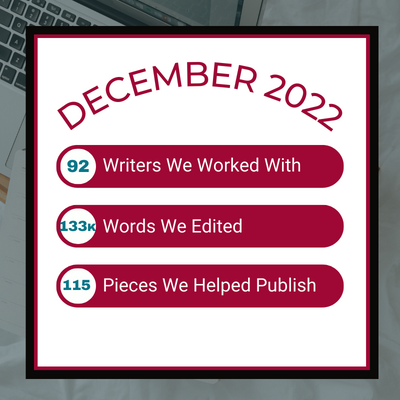 4 Proven Strategies to Improve Your Writing Day by Day

You’re fiercely committed to being the best writer you can be. But sustaining that level of commitment amid the chaos of life can be hard.

Let’s face it. On top of writing, we have responsibilities. It might be an urgent professional obligation. Maybe it’s a family matter or even just a creative slowdown you can’t explain.

When your craft is a creative pursuit like writing, the path to consistent improvement—on a schedule you can maintain—isn’t always clear.

Fortunately, there are small steps we can take every day to remove the resistance and improve our writing.

Focus on Your System, Not Goals

When I took stock of my blogging frequency last year, I realized I’d hopelessly missed all my grand writing goals.

Disappointed and frustrated, I studied my published posts. Out of the starting blocks with a strong showing, things soon started to fall apart as “urgent” tasks took precedence over writing practice. Pretty embarrassing for someone who earns a living from words, right?

I knew something was wrong with my approach and soon discovered the problem. I had well-intentioned goals, but no defined system to support them.

“If you’re a writer, your goal is to write a book. Your system is the writing schedule that you follow each week,” writes Clear.

A specific system also eliminates a lot of the resistance to getting the work done. When there’s a set of steps we need to follow, it’s much easier to sit down and get to work.

Even creatives, who appear to draw from a well of inspiration with ease, use systems in their everyday lives.

As a child, German artist Jorinde Voigt thought she was going mad. Her dreams were filled with vivid images she couldn’t make sense of.

Voigt began creating works of art based on her dreams. Today she’s one of Germany’s leading artists.

In an episode of Freakonomics, Voigt shares how she spends an hour at the start of each morning in her garden or kitchen thinking.

“… it’s more being awake, but also waiting for myself, and observing myself and observing the pictures which come up in me. And then, also questioning them, a riddle… . I always have pictures or abstractions in my head. I wake up with that.”

Here’s a broad overview of the system I use to create a blog post each week:

Day 1: Select idea, headline and outline including subheads and the key points in each section, and indicate whether additional research is needed.

Day 2: Do the first draft—leaving highlights where additional research must be added or facts need to be checked.

Day 4: Do first round of edits.

Day 5: Do final polish, and format for WordPress.

This system is based on an approach I learned from writer Henneke Duistermaat, and one that Ali Luke describes in a post on Craft Your Content. Since working this way, I’ve been able to publish each week with ease and efficiency.

On the Shoulders of Giants: Deliberate Practice

I have a confession.

I’ve been writing professionally for 16 years, but the idea of practicing the craft is one that I’ve only started embracing in recent years. Now when you write every day for more than a decade, your writing is better than it was when you first began. But when you apply a habit of deliberate practice to that process, you’re edging closer to finding a style you love.

Practicing and the power it has to improve performance is widely known and accepted.

However, Malcolm Gladwell popularized the idea that to be truly great we needed to do that practice for 10 000 hours. Gladwell’s book Outliers suggests the world’s top performers have one thing in common: 10 000 hours of practice under their belt.

Subsequent research challenged Gladwell’s stance, arguing that those kinds of rules might only apply to stable, structured professions, not necessarily to creative pursuits.

So what’s the deal? Does practice make any difference when it comes to writing?

Cal Newport, the author of Deep Work, penned a series of blog posts about the method of deliberate practice and its applications for improving professional performance.

He suggests that a specific type of practice yields results:

Famous writers throughout history have enlisted some type of practice.

Benjamin Franklin found authors he admired and rewrote their writing in his own words, analyzing his weaknesses and trying to tear down the composition of each passage.

Hunter S. Thompson rewrote the entire Great Gatsby by F. Scott Fitzgerald to “feel” what it was like to type a great writer’s words.

The great William Zinsser, in On Writing Well, said: “Writing is learned by imitation.” Zinsser himself used to read the works of E.B. White just to “get the cadence” in his ear.

In my own writing practice, I find passages I admire and try to reconstruct them using my words. I try to pay attention to what I like about the piece. Why do these words work?

Early on in my writing practice, I realized my vocabulary was limited, and there were inconsistencies in comma and colon usage. After some research, I found I could remedy these by reading more and practicing specific sentence types.

At first, it may seem that there’s no marked improvement in your writing, but soon you’ll notice it has become easier to convey your message with clean, crisp copy.

The best way to quickly benefit from the ongoing effort to improve your craft is to write it in public.

Writer Jeff Goins refers to “practicing in public” as one of the fastest ways to improve writing.

Goins describes how Chris Rock visits up to 50 small comedy clubs ahead of a big tour. Some of his jokes fall flat. Sometimes the show is so bad people get up and leave.

“When he’s working on new material, Rock may do this 40 to 50 times in preparation for a big tour. At a small New Jersey club near his home, he’ll randomly walk in, take the stage, and proceed to bomb. … He’s not doing his usual bits. Instead, he’s trying out his new material. Sometimes, it goes so poorly that people get up and leave …”

“Why does he do it? Why subject himself to such humiliation? Because Chris Rock doesn’t become Chris Rock by practicing his jokes in a dressing room. He does it by taking the stage and failing in front of an audience.”

When Rock takes the stage to perform in front of thousands, he’s bringing his best—and now we know that brilliance is the result of sustained public practice.

In Peak: Secrets from the New Science of Expertise, Anders Ericsson said there was a “fundamental truth” about practice: In order to improve, you need to push yourself out of your comfort zone.

Committing myself to publishing a blog post each week has made a significant improvement in my writing. Although practicing for myself wasn’t useless, when I know I’m publishing, I’m going beyond my comfort zone. The stakes are immediately higher, and then so are the gains.

So while we agree we need to practice and publish regularly, as modern professionals, we grapple with competing priorities.

While working to improve writing may be important, it’s not necessarily urgent, so it’s easy to get buried under the demands of running a full-time business, meeting external deadlines, or seeing to family obligations.

Now, I worked in a daily newsroom for five years. You do not miss deadlines. If you’ve ever spent any time in the newsroom—or even watched one of the many popular television series set in newsrooms—imagine this scenario: walking up to the news desk to declare: “I’m not feeling inspired today, so I won’t be filing.”

Suddenly when I was writing for myself, this diligence to meeting deadlines relaxed, before disappearing altogether.

The research is clear on this one: We’re good at sticking to deadlines … unless they’re our own. But we might be able to trick our brains into meeting self-imposed deadlines.

In an article for the “Harvard Business Review,” Juliana Schroeder, an assistant professor at the University of California, Berkeley and Ayelet Fishbach, a University of Chicago’s Booth-School of Business professor, suggest two research-backed tactics to increase self-motivation:

1. Give yourself an urgent deadline.

“Typically, a shorter distance between you and your goal is more motivating than a longer one. It feels within reach, and it’s easier to feel that you’re making progress. This means people should set closer targets or sub-goals. So instead of telling yourself … to finish a project in the next month, focus on achieving certain milestones by the end of each week.”

They recommend keeping your focus on the progress you’ve already made.

“Research also shows that when beginning to pursue a goal, people should focus on the progress they’ve made rather than on the progress they still have to make. Only when they’re closer to the finish line should people focus on the remaining distance between them and their goal. Focusing on the least amount of distance—either from the start or from the end of your project—is more motivating.”

When I started blogging for my writing business, I often found myself struggling to put a post together in one sitting. It’s one of the reasons I failed to achieve a greater consistency with my blogging schedule in those early months.

I only realized in retrospect why the practice of spending only a small period of time working on a small section of the blog post worked. Each day, I felt motivated to work on my post. Even my self-talk changed. The story I told myself now was that I was showing up every day to create a piece of work I was proud to publish.

Writing Is a Journey, Not a Destination

Keeping to a consistent writing schedule can be challenging. Even when I managed to find the time, I was held back by that familiar friction. It was only when I created a system that worked for me and committed to ongoing practice sessions that I saw the results.

Sticking to it requires work and the ability to say no to more things. But if your goal is to improve your writing, working this way delivers fulfillment as you carry on. It lets you fall in love with writing again. It was Arthur Ashe who said: “Success is a journey not a destination. The doing is usually more important than the outcome.”

About the Author Bronwynne Powell

With a background in journalism and public relations, Bronwynne Powell got her start in the print newsroom. After chasing deadlines for a decade, she joined a regional government department to manage media relations. Now, she’s a web writer working with leading tech companies to create compelling digital copy that engages online audiences. She is on a mission to save business blogs from the onslaught of dull, dreary copy nobody cares about. Over on her blog, she provides practical tips for creating web content. On LinkedIn, she chats about digital content trends, productivity, and the quest to do meaningful work.